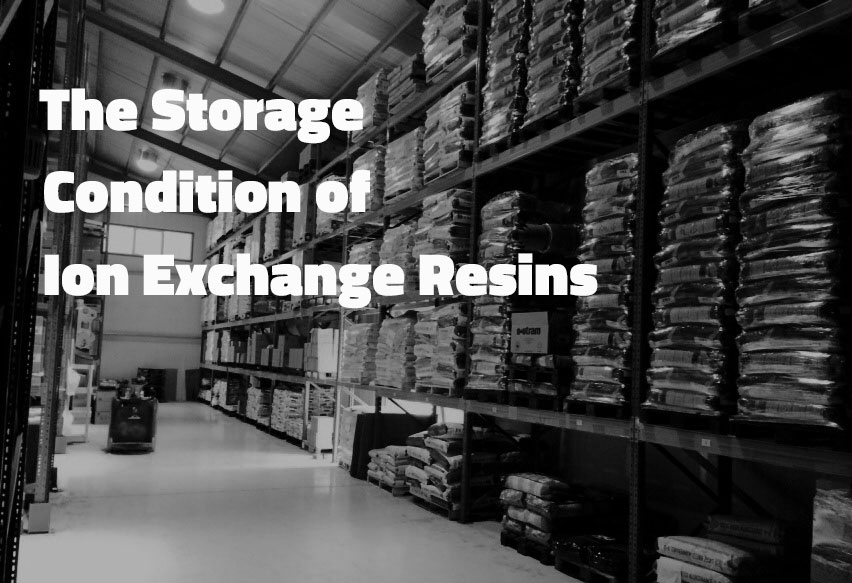 Ion exchange (IX) resin can store safely for two to five years without any chemical and physical deterioration. Always take precautions to store ion exchange resins in their original form in undamaged shipping containers. IX resins should be kept in sheltered, well-ventilated areas, protected from extremes of heat or cold and rain or other moisture conditions. Climate-controlled indoor storage facilities in shipping containers are ideal.

This article explains some precautions to store resins properly to increase their lifetime. Sensitive care for resins helps to protect store resins for four to five years or longer with no defects.

What can affect the resin conditions?

Resin can pass the areas which have 0 0C temperature during the shipment. So, ion exchange resins may face the problem of freezing and thawing. But resins are bearable with few cycles, but repeating the conditions may develop physical damage, cracking, and breaking the polymer beads. This was notified with ten or more repeated cycles, but do not hesitate with the single freezing-thaw cycle. If your resins are frozen, bring them to a warmer place and allow them to thaw before use. But, do not pour hot water to freeze resins by enabling them to sudden cracks.

Generally, resins are not chemical damages with a temperature of 90 0F. But, any resins exposed to elevated temperature levels longer need a resin analyzed before use. Exposure to high temperatures helps to increase the rein leaching ability.

Resins are shipped in their moist, water-swollen form. These resins may lose a significant amount of moisture during the storage, but, in most cases, sufficient water remains inside the polymer beads to prevent the physical cracks due to dehydration of the beads. But physical damages may occur with extreme moisture losses during storage. There are no fractures in resin beads when air-dried resins are re-wetted. But, excessive contact with air may result in chemical damage over time and can cause leachables.

Resin storage to protect the moisture is safer with fiber drums or unlined bulk sacks than with robust packaging.

What are organic leachables?

Simply it defines that the organic compounds come over through the cation and anion resin beads. TOC leachables, sulfate throw, extractable, and organic sloughing are other terms that can include new IX resins that appear with small resin fragments; has a similar composition as the bulk polymer beads. The organic leachable level is very low in the new IX resin batch due to the excellent rinse of the manufacturer before packaging. But there can be undetectable leachables in new IX resins at the time of packaging. The organic leachables start with improper storage.

Some processes do not require oxygen. In anion resins, the beads are coated with amines and are not equally attached to the resin beads. Subtle chemical reactions may occur during storage, and the attached ammines can be detached from the beads. These de-attached amines become leachables. A fishy odor can result in resins due to these leachables. But fishy couldn’t take as an indicator of excessive leachables.

Ion exchange resin leachable level increases with increasing storage time. If we care about the three months, storage of resins in a warehouse can have detectable leachable levels. However, in the same time period, the resins stored in laboratory plastic bottles have non-detectable levels of leachables in the same resin types. It clearly explains that the storage conditions directly affect to above difference.

How to store ion exchange resins?

The main points of concern in the resin storage are temperature control and non-exposure to oxygen. These two points minimize the production of organic leachables during storage. Resins stored in the containers in laboratory conditions have better oxygen barriers than commercial packaging.

The better way to control the temperature and the oxygen is to control exposing the air to the resins. Most resin manufacturers have identified that a polythene liner is an excellent barrier to prevent air in the resin packaging. An improper seal of plastic liners allows air to enter the resin packages and results in leachables, color, or discolor. Therefore, please be ensured to close the liners tightly.

When it comes to a housekeeping matter, avoid the open drums or bags overnight, and make sure to roll and close the liner tightly to prevent entering the air.

Generally, used resins also need to store similarly for a short time period. While conducting maintenance in the IX resin plant, it is common to empty the vessel, and resins get stored in slacks, not in liner bags. The best way to keep the used resins in lined bulk bags for short-term storage of one or two days. Excellent drainage and a large surface area exposed to air encourage the development of leachables and dry off the resins.

If the resins are dry, they should be re-hydrated to avoid the cracks in the resin beads. But, dry resins readily absorb water, and swelling beads also can have breakages. It is recommended to use a proper brine solution for gentle hydration of resins.

Typically, the storage temperature of resins in warehouses, trucks, and ocean containers is not paid attention. But, it is better to know that the resin degradation increases with higher temperatures. The general condition is to store the resins not more than 90 0F. Also, the sensitive resins for some applications need to store at lower temperatures, such as the 60 to 70 ºF temperature range.

What do we need to be concerned about more?