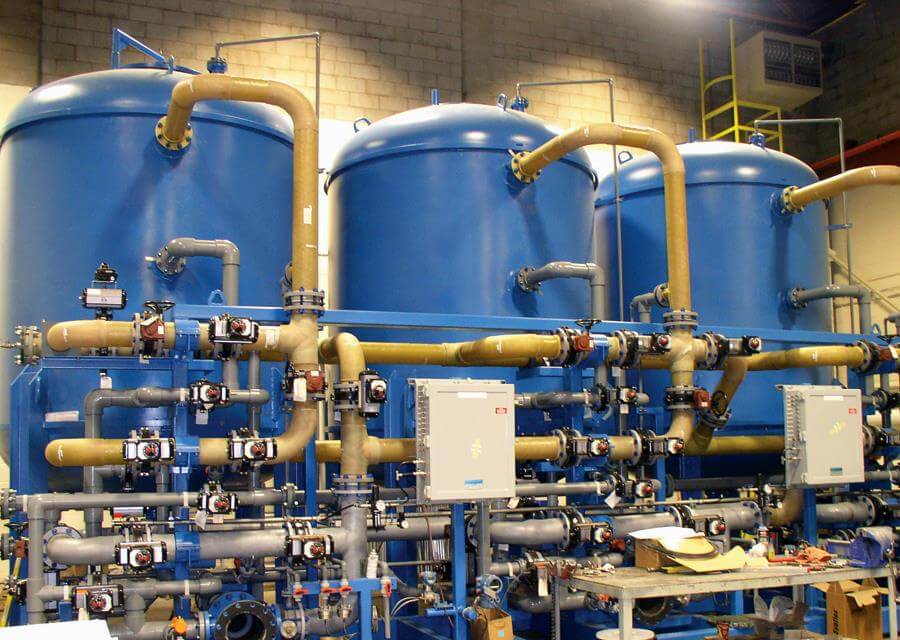 Water Softener Resins for Iron Removal – You Need to Know

Using water softener resins for Iron removal will be an effective method, but it will be complicated due to the different forms of Iron in water.

Before understanding iron removal, it is essential to discuss water softening, resins, and ion exchange. Increasing your key information on simple water chemistry: pH, Iron, and hardness will be advantageous for iron removal water softeners.

What are Water Softening and its Purpose?

Water can dissolve massive amounts of substances. Therefore we can say water is a universal solvent. While these substances dissolve in water, they can be ionic or non-ionic. Ionic particles either carry positive charges or negative charges. Non-ionic particles have no charge, and they are neutral.

Water that carries Ca2+ and Mg2+ ions more than the highest desirable level is called “Hard Water” or hardness in water. Elevated calcium and magnesium ions make it challenging to dissolve soaps in water and clog pipelines, reducing the efficiency of kettles and heaters.

“Removal process of Calcium and Magnesium ions from Water” called Water Softening. Ion exchanging is the simplest and most economically effective method for it.

Resins within the softening plant tightly hold its negatively charged anions which is attractive for any cations. At the initial stage, resin beads are coated with Na+ ions. During the process, Resins exchange Na+ ions with Ca2+ and Mg2+ ions. So softened water carries Na+ ions.

What are Softener Resins?

Resins are essential materials throughout the whole process of water softening. Mainly, the performance of a water softener depends on the effectiveness of inserted resin. Knowing how resins work will help you select the best water softener and re-bedding your existing softener that meets your target; hardness and iron removal.

“Crosslinks” are resulted in resins during its manufacturing in different percentages. In other words, the structural integrity of resin beads can be addressed as crosslinks.

Mixing polymer components in various ratios cause to results in different crosslink percentages. They can vary as 7%, 8%, 10%, and 12% in common.

The standard crosslink percentage in the industry is 8%. Water softeners that use 10% beads show a bit of high performance.

Advantage and Disadvantage of the Fine Mesh Water Softener Resin

The dimension of a resin bead can interpret as mesh size. Fine mesh size defines resin beads that are smaller in their scope. When beads are getting smaller, they can pack tightly. It is caused to decrease the flow rate through the resin bed. But fine mesh resins increase the surface area of the resin bed to attach more cations. Though fine mesh or ordinary resin fouling can occur, it has a bit high frequency for fouling while considering fine mesh resins. The fine mesh will do a decent job in iron removal with relevant conditions. There should be a unique screen to hold fine mesh resins tightly to limit migration.

Regular type resins prefer to remove hardness, but fines mesh resins like simple iron removal in well water. But there are many conditions on iron removal. Fine mesh can filter Iron from water up to 10 ppm by maintaining the right conditions.

How Iron Dissolved in Water?

Why do we need to know about Iron in water before iron removal? Because Iron appears in several forms in nature. Finding its formation in water shows the easy path to select the best method for iron removal.

Iron is one of the most abundant elements in nature. It is present in groundwater due to dissolving different geological formations of Iron due to rainfalls. Iron is very much essential in human nutrition as well as some organisms in the soil. There is no harm with Iron in water, but it is described as contaminated water, but it gives an unpleasant taste for drinking water. Iron-rich water couldn’t use for cooking purposes due to turning meals into a dark color. It may cause corrosion of steel and cast iron pipes while distributing water. Due to iron bacteria, there is a slimy coating on water supply pipelines. Also, it interferes with laundry activities.

According to the WHO guidelines, there is no taste with a concentration of 0.3 mg/ltr, but flavor and color can be occurred (https://www.who.int/water_sanitation_health/dwq/gdwq0506.pdf).

So it is better to remove Iron from drinking water.

Iron presents two forms in water due to pH and oxidation-reduction potential. One is soluble ferrous ions and insoluble ferric ions. Underground water (deep well water) and surface water in anaerobic conditions contain Iron, as its ferrous (Fe2+) form. Fe2+ ions dissolve in water with clear and no color. Exposing such water to air or oxidizing agents ( Chlorine) causes Fe2+ ions to convert its Ferric (Fe3+) ions, which is a reddish-brown substance, making water turbid. Water with ferric Iron is also called “red water iron .”Iron can also be present in water as colloidal iron and bacterial iron, except for these two forms.

pH in water helps to determine the solubility of Iron in water.

Water that does not contain Oxygen carries Fe2+ ions. These ions are more stable with pH < 7. But it is good to keep in mind that ferrous ions are stable in both high and low pH values. Iron in surface water with less pH value than 6 maintains its ferrous states though Oxygen is present.

Water softeners can be used for iron removal when Iron performs its divalent stage (ferrous ions) in relevant pH values. At that procedure, low pH needs to be carefully raised while keeping ferrous ions in the same form. AS per the hardness removal by softener, soluble Iron can remove with exchanging ions.

When we consider the affinity of ferrous ions to the resin beads is lesser than Calcium but higher than Magnesium ions. Similarly, soluble irons are attached to the resin beads, and coated cations in resins are released into the water.

In surface water, ferric ions are more common, and it is insoluble and combined with naturally occurring substances that couldn’t remove with a softener. Removal of ferric ions through resins is problematic. When ferrous ions are oxidized to ferric ions, it forms tiny particles. They are lesser than one micron. Iron removal ability depends on flow rate, particle size, resin size, and uniformity.

Organic Iron can’t remove through softener units. But some formations of organic irons can be removed using organic traps, which means anion resins.

How Regeneration Occur In A Exhausted Resin Bed?

When ion-exchange resins are fully loaded or saturated with contaminated ions in their process, regeneration is the process that takes place to remove picked contaminants and make resins reusable. Concentrated NaCl (concentrated Salt or brine solution) or regenerate chemicals can use to regenerate or increase the capacity of resin beads to reuse over the years.

There are a few steps in the regeneration of resins; 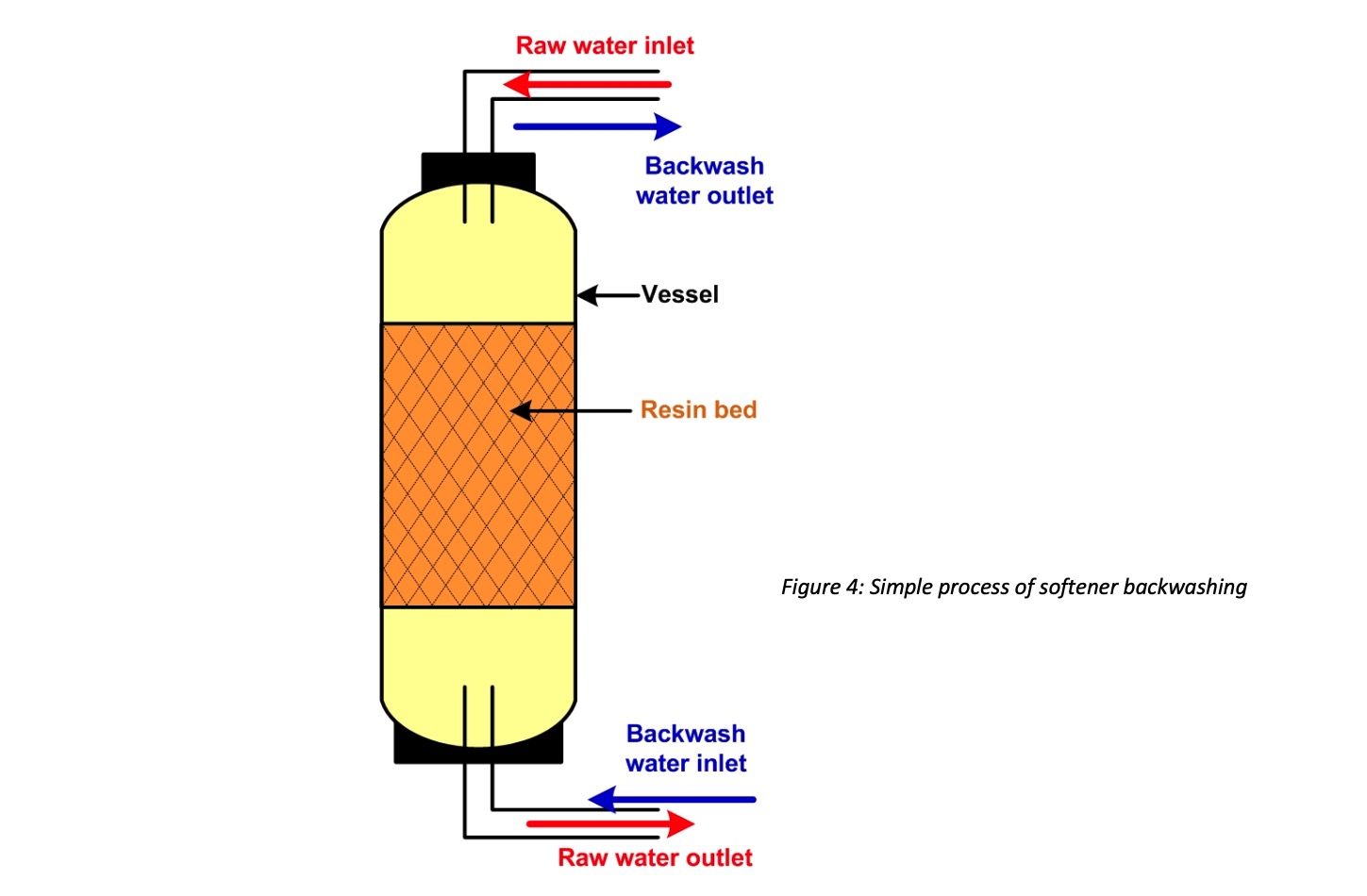 It is problematic when iron (ferrous) removal softener resins regenerate. At the same time, the addition of water to the brine tank can carry Oxygen with brine solution. During the regeneration process, Oxygen can meet up with ferrous Irons; then, they convert to Ferric ions and deposit on the surface of resin beads. Regeneration doesn’t do a decent job of removing precipitated Iron in softeners, so Iron will gradually accumulate within the resin bed and clog the space between resin beads. It may cause pressure loss and short-circuiting of the softener unit, which leads to customer unsatisfactory.

Do Resins Face to Fouling?

Fouling is common with Iron removing as well as water softening processes. The contaminants adhere while exchanging ions, cover the resin surface, and block the total ion exchanging process in the resin beads.

Fouling of resins can occur for many reasons, including Iron & Manganese, Aluminum, Hardness precipitates, oil, and Silica. Irreversible degradation of resins occurs due to organic fouling, Oxidation, and Thermal Degradation.

Here we are going to discuss Iron fouling.

When Iron is present in Ferric forms, it is not dissolved in water and coats them in cation resin as previous learnings. So it prevents the exchange of ions. The presence of Iron and manganese raise organic fouling. The concentration of Iron and Oxygen causes too. Due to the high concentrated Iron, fouling can also occur with frequent backwash. So it is better to use a filter before the ion exchange unit. As a remedial action in Iron fouling, strong acids and reducing agents can treat cation resins.

If you have Iron in water, you first need to identify which type of Iron is present in the water. Whether they are organic, ferrous, or ferric, select the best method to remove Iron.

Water softener resin is the easiest and economically practical method for eliminating soluble Iron in water.