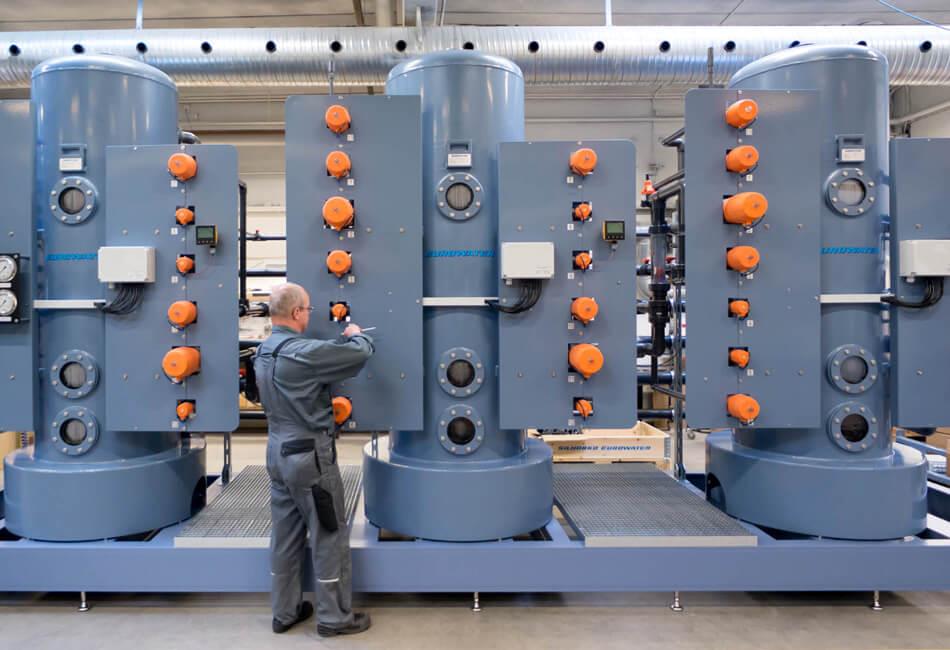 We can find lots of ions in water. Electrically charged atoms or molecules can be interpreted as ions, and they can be negatively or positively charged. Negative ions are called anions, and the others are cations. Natural water with dissolved anions and cations is problematic and hence cannot use directly in various applications.

Do you know about deionization? Let’s go ahead.

Do you know the deionization process and key role of resins?

What happens within the cation resin column?

Lets’ get clarified furthermore. Imagine raw water contains Ca2+, Mg2+, Na+, HCO3-, SO42-, Cl–, and NO3– ions. As mentioned in the above paragraph, cation resins capture positive ions contained in this water and release H+ ions into the water. The anions in water bonded with released H+ ions and produced H2CO3, H2SO4, HCl, and HNO3. Strong acids are generated in effluent water from the cation resin bed. We can measure this effluent’s total strong acid concentration, called “free mineral acidity (FMA).” FMA act as the indicator for the regeneration process.

When the FMA value drops sharply, it explains, the resin bed gets saturated with cations in water, and no more efficient exchange of cations with hydrogen ions. It simply shows the minor release of H+ ions into the water and less generation of strong acid in effluent water. With the low FMA values, you need to regenerate the cation bed to return the resin beds to their hydrogen form. Sulfuric acid is available at an affordable cost; therefore, in most cases, sulfuric acid can be used to regenerate the resin bed. But it would be best if you were keen on improper sulfuric acid consumption to prevent the irreversible fouling (with calcium sulfate) of the cation resin bed.

What happens within the anion resin column?

Anion resin column is required to complete the deionization process. Effluent water from the cation resin vessel passes through the anion resin bed. Strong base anion resin beads are in the form of hydroxide. Hydrogen ions in the strong acids in effluent replaced with hydroxide ions release water molecules. Refer to the following illustration; R is the resin bead.

Careful observation of the above indication shows the complete removal of cation and anion ions in feed water. In the real world, ion exchange reactions are equilibrium reactions and can occur some leakages. Sodium leakages are the most common, converted into sodium hydroxide in the anion resin bed. Therefore, two-bed anion-cation DI units produce slightly alkaline effluent water.

Strong base anion (SBA) resins are regenerated with sodium hydroxide solution in the deionization process. SBA resins also remove silica in water. The essential parameters of effluent water are effluent silica level and conductivity. Caustic can result in anions and will be a cause for small leakages of silica. The capacity of leakage depends on the dosage of regenerant and the chemistry of processed water. Silica can be removed from the resin bed with heated sodium hydroxide up to the given temperature by the manufacturer.

What will be the most suitable resin types in the deionization process?

As per the above paragraphs, you know two different cations are used in water deionization. They are cation resins and anion resins. Let’s consider how these resins work during the ion exchanging process.

There are two categories of cation resins: strong Acid Cations (SAC) and Weak Acid Cations (WAC). WAC is not made from crosslinked styrene but is commonly made with acrylic crosslinked DVB. Usually, WACs are taken to the partial DI applications or dealkalization. SAC resins are stronger than WAC, and they have a high capacity. H+ form of these SAC resins exchanged all the cations by converting their salts into relevant acids.

Weak base anions (WBA) and strong base anions (SBA) are the two types of DI resins. WBA is not used in the Di process because it adsorbed acid molecules, does not exchange hydroxyl groups, and doesn’t generate water as a byproduct. Also, they cannot reduce CO2 gas (it is present in the cation resin bed with ion-exchange step in low pH) and silica.

According to the above details, the most suitable resin types for the DI process are SAC and the SBA. For the complete deionization or demineralization to produce ultra-pure water in different industries, use mixed-bed resins.

Have you known about mixed bed (MB) resins?

If you have carefully read this article, now you will be able to understand mixed bed resins. An MB is a combination of SAC and SBA in a 2:3 ratio. The resistivity or electrical conductivity is the only way to measure the mixed bed water because it is deficient in dissolved ions. The main point of success of the MB unit is continually working to neutralize the pH values. MB resins can deliver high-quality water with higher capacities to the given quantity of MB resins than the two-bed resin DI system.

The only disadvantage of the MB resins is the highly complex regeneration process. It also needs more equipment.

What will be the physical structure of the resins?

It can be either a gel structure or a macroporous structure. Gel-type resins are cheaply available. Typically, they are transparent and haven’t distinct pores. Its’ mechanism is diffusion.

Macroporous resins are opaque and have distinct, continuous channels. They have increased surface area than gel resins. So these resins have gained good kinetics. Also, they are strong to oxidizing conditions due to the high level of crosslinking.