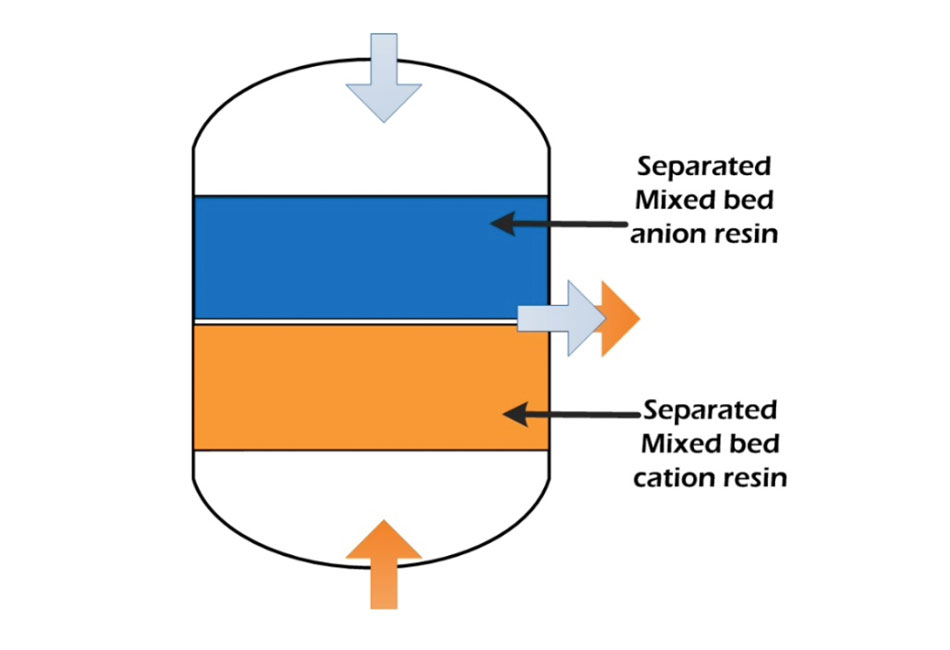 How does mixed bed resin work in a DI plant?

A beginner in the resin industry probably messed up with ion exchange resins and mixed bed resin. But it is simple, and follow the article to learn more.

What are mixed bed resins?

Mixed bed resins are a combination of strong acid cations and strong base anions in a 2:3 ratio.

Conventional deionization plants use two beds; one vessel contains a cations resin bed, and the other has an anion resin bed separately.

A mixed bed deionizer has both anion and cation resins in one single unit. The ion exchange process will be repeated in thousand times with the water flow through the MB resin bed. It helps to produce high quality pure water by the DI plant.

The raw water with dissolves positive and negative ions enters the vessel, and flows through the mixed bed. Water can consist of Ca2+, Mg2+, Na+, HCO3-, SO42-, Cl–, and NO3– ions. The mixed bed contains anion and cation resins.

Cation resins with the form H+ have replaced their H+ ions with all positive ions in raw water and released H+ ions.

Same manner, both anion, and cation resins release OH– and H+ ions, and deionized water will be generated. Following examples shows you the theory in a simple manner.

Mixed bed resins eventually get depleted, and we can re-activate the resin bed to work properly. The reactivation process is called “regeneration .”The complicated process of the mixed bed resin plant is regeneration.

How to regenerate a mixed bed resin plant?

Regeneration takes a few steps to complete its procedure.

Backwashing is the first step, and backwashing the exhausted MB results in two separate anion and cation phases according to their density. The cation resin has a higher density than anion resin; therefore, cation resin goes down, and anion resin goes upstream. Backwashing flow rates need to be adjusted to have enough bed expansion. Also, anion resins can be entrapped at the bottom layer; therefore, changing flow rates helps prevent accumulation at the cation resin layer. It is necessary to start with a high flow rate for fluidization of the resin bed, and reducing the flow rate will prevent the anions from escaping. Backwashing can be conducted within 20-30 minutes, but it can be 40 – 50 minutes with the heavy suspended solid load.

After Backwashing, it will take a few minutes to settle the anion and cation resins into separate layers. We can observe a sharp separation line, and no more cross mixing of anions and cations is visible.

Regenerant injection can be arranged in “simultaneous injection” and “sequential injection.”

The water in the shell needs to be drained before occurring air mixing. It will help to have a homogenous mixing of both anion and cation resins. The water is requested to drain down up to the level of the resin bed. Please follow the suppliers’ guidelines.

The recommended airflow help anion and cation resins beds mix with nitrogen or fresh air. There is a chance to trace oil when you use a compressor. Mixing time can be >5 minutes and less than 15 minutes.

At the top of the vessel, a water flow can be inserted into the tank. It will take some time to fill with water. You can use NaOH diluted water in the first few minutes with the support of a feedwater line at a service flow rate to prevent the disturbance of the mixing of resins.

This step also can identify as the fast rinsing, and it is used to complete the regeneration procedure to obtain the required effluent quality of the DI plant.

Discussing mixed bed resin activities is pretty interesting with the basic knowledge. What is Deionizing? What is the process of DI? What are DI resins? How do resins get prepared? Do I have an idea of mixed bed resins?, and How does mixed bed resin work? Find your answers by reading this article. Here is a brief of the above.