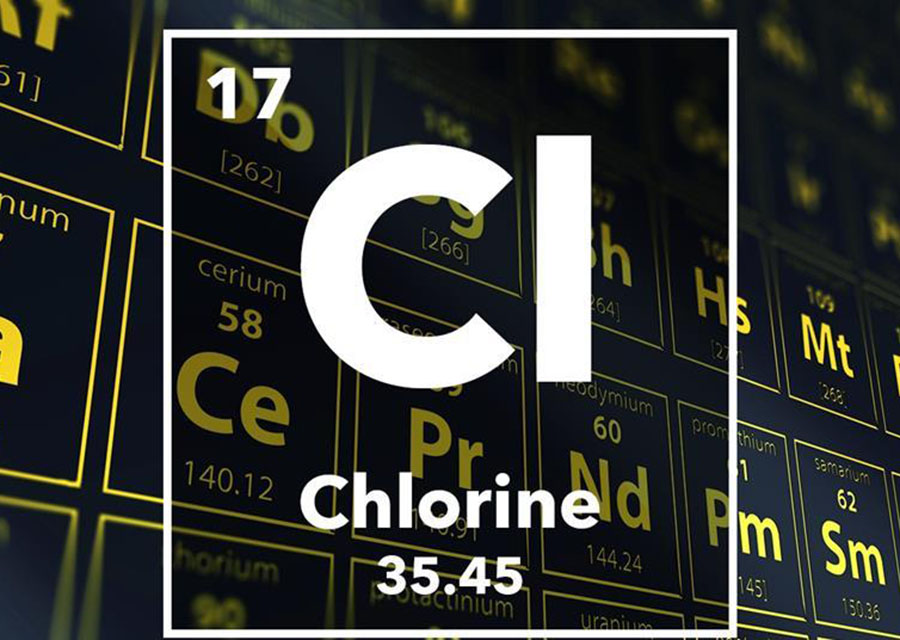 Water softeners are used to remove hardness in water. Also, it helps to remove dissolved iron in water by maintaining the appropriate conditions. Resins can be regenerated with a high level of brine solutions to expand the lifetime. Unfortunately, some facts build the resin bed weak. They are Chlorine and Chloramine degradation, Osmotic shock, and iron fouling.

This article discusses the Chlorine and chloramine degradation of resin beds.

Do you know about Chlorine?

Chlorine (Cl) is a very reactive element primarily available as a compound on the earth. Usually, Chorine makes ionic bonds with Sodium and form NaCl (salt). We can see these compounds found in the sea, salty lakes, and in the ground as Halite (rock salt).

Before discussing Chlorine oxidization in water, let’s find the simple chemistry of Chlorine.

Chlorine is placed in group-VII (halogen group) and 3rd period in the periodic table. So it can form a massive amount of substances. Chorine is available as Cl2 gas at room temperature.

The chorine element contains 17 electrons and the electronic configuration 2, 8, 1. The electron in the last shell always tries to eliminate to become stable. Then Cl element always makes a Chloride ion (Cl-). So Chlorine can make covalent bonds and ionic bonds. NaCl there is an ionic bond, HCl and Cl2 contain covalent bonds.

Chlorine compounds are very reactive and corrosive. Concentrated HCl acid can corrode Stainless Steel, hence stored in glass or plastic bottles. Chlorine gas is also very corrosive and reactive. So need to keep under following safety methods. The chlorine gas can dissolve in water and form weak HOCl, breaking down under UV energy in sunlight. Hence good to keep without sunlight.

Applications of Chlorine are very much enjoyable. It plays an integral part in glue, paints, pesticides, food additives, and PVC industries. Among these industries, Chlorine performs a considerable role in medical science. It is a constituent of a variety of medicines. In the medical sector and especially in the water and wastewater treatment field, use Chlorine as an excellent disinfection method.

This article will help you understand how this disinfectant will disadvantage softener resins.

There are usually trace amounts of ammonia and hypochlorite in the water with the availability of chloramines. They are hardly ionic; therefore, monochloramine with less molecular weight is difficult to remove from water by reverse osmosis (RO) or water softening. Boiling and distillation cannot be used either.

Can Chorine act as a disinfectant in drinking water?

It is the most usable disinfectant worldwide. Chlorine is highly effective and applicable to destroying pathogens in water and wastewater on an industrial scale. Bacteria and viruses have chemical bonds in their molecules. Chlorine compounds break these bonds in molecules by exchanging atoms with other compounds in bacteria, such as enzymes.

This process can express as “Chlorination.”

Designers are more concerned about the Concentration and the contact time (CT) of the chlorine dosing process. At the end of the water treatment system, it should maintain the residual chlorine level.

Is there Chlorine impact on softener resins?

Chlorine and chloramines are potent oxidants and increasing temperatures that break the Divinyl benzene (DVB) crosslinks. Then beads swell, take moisture and become mushy. Due to the swelling, pores & channels block access to functional groups. When DVB gets destroyed, styrene comes apart. So you can note that resin beads can crush with your fingertips. And also, you can see the pressure loss during service flow due to the compaction of broken resin beads within the resin bed. Continuous attack to resins by chlorine results in losing spherical shape and rigidity.

Can we protect softener resin from Chlorine?

Though Chlorine is an important disinfectant that can be used as a cost-effective, high availability, and successful agent, it negatively impacts water softener resins.

Chlorine compounds oxidize within the softener; therefore, it is better to remove Chlorine before entering the softener. Chloramine can treat up to low levels using sunlight or aeration and remove utilizing a granular activated carbon filter. GAC filter brings down chloramine concentrations (1-2 ppm) to less than 0.1 ppm. Active carbon comes in contact with chloramines for a significant time. An active carbon filter is selective due to removing other compounds, such as Chlorine (reduction to chloride), hydrogen sulfide, and organic compounds.

The best option is to use an activated carbon filter to absorb the chlorine compounds.

Another way to remove Chlorine and chloramines from water is reverse osmosis (RO). But, it is high cost and difficult to maintain.

Some resin manufacturing companies have strong resins which remove chlorine.

Softeners are mainly used to remove hardness in water. The process used is the ion-exchange process. Ion-exchanging is done with the help of resins which are synthetic products of the combination of Styrene and DVB.

These resins have a long lifespan, but the period gets decreased up to half due to some reasons.

Chlorine and chloramine oxidization is one of them.

Chlorine occurs as gas and ionic compounds in nature. Humans collect Chlorine for many purposes, including disinfection for many years.

Chlorine is prominently used as a disinfectant agent in water and wastewater field to reduce pathogens in water.

It is a very effective method that can use in the industry. However, it negatively impacts when residual Chlorine becomes higher than 02 ppm.

Chlorine and chloramines are strong oxidants in water. Resins are affected by them. DVB crosslinks in resin beads get attacked, less strong to bind the polymers and break down.

Resins become swollen and can be crushed by fingers. Resins are not functioning, and the resin bed gets compacted due to broken particles. Pressure loss occurs in the softener plant, and resins need to be replaced.

Using a GAC filter to remove chlorine compounds and other suspended particles will be an excellent decision to protect your softener.